Use the CASHe Buy Now Pay Later
option to recharge your Uber wallet
and use that to book your rides! 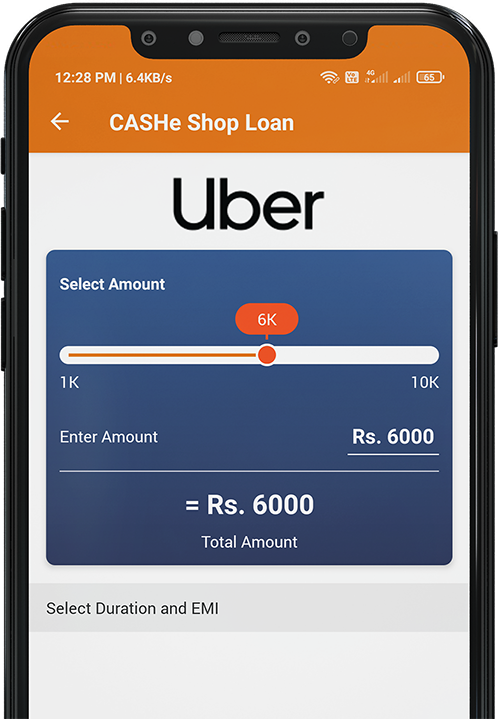 Not everyone is comfortable or can afford to pay for Uber rides right away. It can also prove to be expensive for those who need to book Uber rides frequently for various purposes. CASHe’s Uber Buy Now Pay Later can take care of this by letting you apply for a loan amount that will get credited as Uber Vouchers. This can be used when you book Uber cabs and you can pay back the amount to CASHe in easy EMIs at 0%* interest.

Upload the necessary documents and fill the personal & employment details

Apply for the ‘Uber Shopping Loan’

Select Uber from the options on the screen

Once the loan is approved, the money is then credited to a Uber voucher which can be redeemed when you shop online on the Uber website or mobile app.

Book your ride on Uber

Get 0%* interest with easy EMI’s

How to make the most of the Uber Buy Now Pay Later with CASHe to book a cab online?

Some Uber rides can be expensive, especially during peak hours. If you are someone who has to frequently take Uber rides, it can prove to be expensive and not something that you can afford all the time. By availing CASHe’s Uber Buy Now Pay Later, you will have a recharged wallet that can be used to pay for the Uber cab rides.

Mohit travels by Uber all the time but finds it cumbersome that he has to manually make payments after every trip. What’s more, he also worries how expensive these rides are turning out to be. On his quest for finding a personal loan app, he came across CASHe and its Buy Now Pay Later feature to book Uber online

He decided to go with a loan amount of INR 6,000 which he could pay back to CASHe in easy EMIs over 180 days

This loan amount almost immediately reflected in his Uber wallet. While booking his next Uber online, the amount was directly deducted from his wallet and he did not have to worry about making individual payments every time

The Uber Buy Now Pay Later made it so much easier for Mayank to book Uber rides, without worrying about the added expense

1 year for each voucher issued

How can you save by riding with Uber using CASHe?

Generally, when you get a gift card or voucher, you have to pay for it right away. That is not something you have to worry about while availing CASHe’s Buy Now Pay Later feature. The loan amount will be reflected in your Uber wallet and can be utilised while riding with Uber. This loan amount can then be paid back to CASHe on a later date in easy EMIs.

On what rides can I avail the Uber Buy Now Pay Later feature?

You are present with numerous options when you book Uber online - Uber Go, Uber Premium, Uber XL, etc. The Buy Now Pay Later feature is applicable on all rides.

How do I avail this Uber Buy Now Pay Later?

How much can I borrow and what is the interest rate?

How long does it take for the loan to get approved?

As soon as your documents have been uploaded and verified, the Buy Now Pay Later Feature will get activated for you to use on Uber.

How do I pay back the Buy Now Pay Later?

Once you choose your repayment plan, you can either opt for the auto debit facility or make payments through NEFT/IMPS/UPI.

Please write to support@cashe.co.in if you need further assistance.